In March, life as we knew it changed drastically. We were reminded of the importance of human connection and friendship as we were told to stay indoors and we missed seeing loved ones.

Lockdown kept us apart physically, but it hasn’t stopped friendships blossoming. Many new friendships have been born through Phone a Friend, our programme which brings younger and older neighbours together through regular calls. Over the past few months these calls have not only created friendships and company, but have become a lifeline to many neighbours, young and old, across our city. 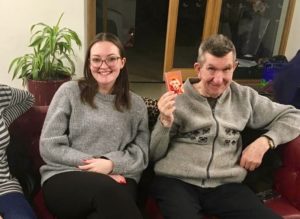 Since our one-to-one friendships switched to phone calls, over 1000 calls have been shared between pals like Charles (69) and Alice (23). The pals were Social Club regulars and have swapped their pub quizzes for writing poetry over the phone. Alice has also supported Charles to set up an email account and to use Zoom and to get involved with Virtual Social Clubs.

Alice said “If I’m feeling a bit low or working from home has been a struggle that day, it’s good to have that time to remove yourself from that and distract yourself. Talking to Charles really lifts my mood. It makes me feel happy, valued and gives me a sense of purpose.’’ 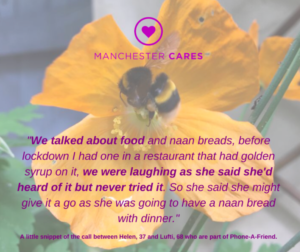 Charles said: “I haven’t been able to go out in 12 weeks because I’m classed as vulnerable. It has been hard. It’s good to talk to someone, someone you get on with. We can talk about health problems, things to pass the time, what we’ve been up to in lockdown.”

Alice and Charles aren’t the only ones enjoying each other’s company. Over 20 new friendships have blossomed through these difficult times. Like Maqbool (72) and Hannah (29), who through their friendship are writing Maqbool’s memoirs. They enjoy sharing powerful stories about the Moss Side Riots in 1981 and Nai Zindagi Naya Jeevan, a programme which was aired on the BBC in the 1970s, specifically for immigrants from Pakistan and India.

Patricia (80) and Aimee (24) who both live in North Manchester and have clocked up over 20 hours of calls and have even managed to have a socially distanced visit “It was so lovely to finally meet Patricia and put a face to her voice. I stood at the front gate and Patricia showed me her garden which she loves!”

Pals have found comfort, and things in common. Rheanne (28) said “I have really enjoyed getting to know Gloria (69), we have spoken a lot about the Black Lives Matter Movement, which I have found really comforting. We have even discovered that my Nan and her mum are from same place in Jamaica!’’. 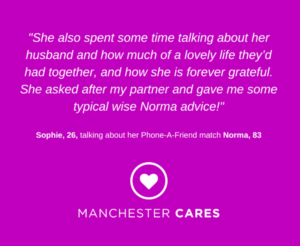 Some pairs love having a laugh. Matt (31) said “We spoke about some tiling I had done over the weekend and Leo (85) gave me some tips on grouting! We joked that I should start a new business as the slowest ever tiler!”.

Lockdown has shown us how much we need friendship and each other, and that even though we may be apart physically, we can still stay connected.

If you've been inspired by these stories and would like to get to know one of your neighbours, just like Charles and Alice or Matt and Leo, sign up to get involved through our website!