We invited avid Manchester United fans Marie (80) and Eleanor (26) to watch their beloved team play Aston Villa at Old Trafford. Marie and Eleanor met for the first time on match day, and were soon to find they had a lot in common.

Marie moved to Manchester from Southern Ireland back in 1966. Back in Ireland, she was involved in Gaelic football and when she first moved here, she didn't understand British football, but gradually got into it and ended up loving it. Her husband Seán, who sadly passed away two years ago, played Gaelic football for his county in Ireland and he was a big United fan. Marie said "he loved United, he said there was no one like Georgie Best". In the days before they had a telly, Marie and Seán used to listen to matches on the radio. Nowadays, Marie really enjoys watching United games on TV with her children and grandchildren, but had never been to Old Trafford before her day out with Eleanor, and told us she was delighted to have the opportunity to experience a live match. She's seen quite a few players in her time, from Bobby Charlton to Paul Scholes to Denis Law, and is proud of the Irish players that have been part of the team, including Roy Keane, who’s from Southern Ireland just like her. 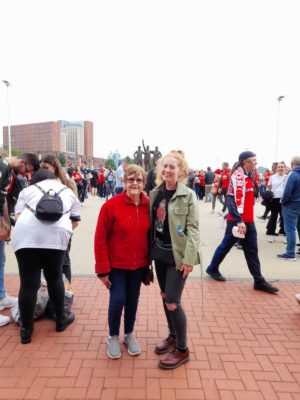 Eleanor is originally from Worcester and has lived in Manchester for a number of years, working as a physiotherapist. She describes herself as a "lifelong Man United fan" and told us that her grandma, a Mancunian and a season ticket holder, wouldn't have let her support anyone else. Eleanor told us that she had “all of the merchandise she [grandma] could get her hands on, including Man United Top Trumps" and has been to Old Trafford a number of times, where she enjoys “the buzz leading up to the game, the atmosphere, and the pies”. This season, she is most looking forward to "challenging for the Champions League title - with the help of Ronaldo of course!"

We also asked Marie what she was most excited about this season, and her answer was similarly full of hope, and faith in Ronaldo: "They used to win everything, but they've had hard times, they've been down for the last nine years... and they're going to come back up again! They've got Ronaldo back now." Before the match, Marie was confident that United would beat Aston Villa, and predicted the score could be 5-0. Sadly the result was a much more disappointing 1-0 to Villa, but Marie still said it was “a grand day out, a great experience - we just got on well together” and told us “it’s just what I needed, to lift me up”. Eleanor told us: “I enjoyed spending the day with Marie because it was full of laughs, and I liked being part of her first experience of watching the match at Old Trafford. It felt as though I was going with a good friend”.

Marie has previously joined in with a few of our Social Clubs, which bring older and younger people together for connection and laughter, and she thinks “you’re better off to meet with younger people, to associate with them and their ideas – it keeps you young!” Marie hadn’t been able to join in with as many activities since the pandemic, so going to Old Trafford was a real treat. Since watching the match with Eleanor, Marie has also come along to our recent Man United-themed Social Club, a tour of the Old Trafford stadium and museum, along with her friend and neighbour Ray. She said she really enjoyed the trip, particularly when the group got to sit in the manager’s chair and have their photos taken. 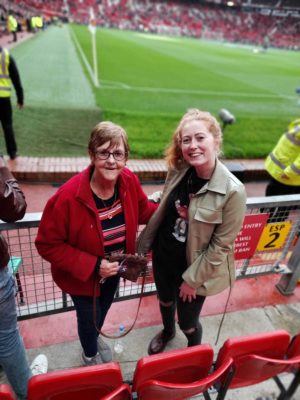 Eleanor is a new volunteer, who was inspired to get involved with Manchester Cares after the recent, sad loss of a friend who was nearly 101 years old, whose words of wisdom and unconditional support she really valued. Eleanor signed up for our one-to-one friendship programme, Love Your Neighbour, and is also interested in joining our Social Clubs. She is passionate about striving to end loneliness, and described taking part in our programmes as a "win-win scenario".

As Marie and Eleanor got on so well, bonding over their shared love of their local team, and shared despair at the result that day, they are a perfect match for our Love Your Neighbour programme, and will be continuing their friendship. Eleanor described Marie as “brilliant” and “funny, easy going and sincere”, while Marie said Eleanor was “a lovely girl - really bubbly, nice, easy to talk to” and someone who “talks a lot, asks questions and is good with people”. They are looking forward to chatting on the phone and meeting up out and about in Manchester, and no doubt they’ll be watching plenty more matches together!

We would like to extend a huge thank you to Manchester United for their generous hospitality and for providing Marie and Eleanor with such a fantastic opportunity.

If you’d like to get to know one of your older neighbours and find out what you might have in common, you can sign up for our Love Your Neighbour programme here