During what has been a difficult six months for many, Manchester and Liverpool Cares have had an opportunity to make a positive change, in putting an end to a famous rivalry. 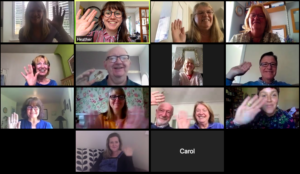 People in the north are often aware of the long standing tension between the north-west cities of Manchester and Liverpool. Many people believe this rivalry to be rooted in the competition between the football teams of Manchester United and Liverpool FC. In reality, the ‘difficult’ relationship can be traced right back to both cities' industrial heritage. Manchester’s industrial development centred on the spinning and trade of cotton. Liverpool’s industrial asset was its port. This is where the two cities’ became codependent. Manchester relied on importing its raw materials and exporting its products through the port of Liverpool. It was thus subject to the handling fees of the Liverpool merchants. Manchester’s industrialists saw these fees as extortionate, and felt resentful towards their Merseyside neighbours. 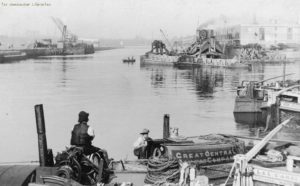 In the 1890s this tension came to a head when Manchester industrialists got together and purchased a strip of land between Liverpool and Manchester, which by 1894 was developed into the Manchester Ship Canal. This ship canal – the biggest in the world at this point – allowed ships heading for Manchester to bypass the port of Liverpool and bring materials straight in and out of Manchester. Therefore bypassing the fees of Liverpool’s port. This hit Liverpool’s economy badly, and led to Manchester taking Liverpool’s place as the economic capital of the north. So the root of the name calling and general hostility between the two cities was money. A tale as old as time. 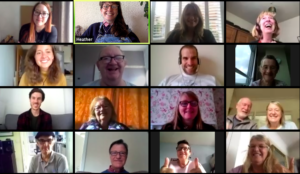 At The Cares Family we are all about bridging gaps and bringing people together, so when two researchers from Liverpool University got in touch we saw an opportunity to build bridges with our scouse neighbours. Lisa and Jacky from Liverpool Uni run a project called Cinema, Memory and Wellbeing, which aims to ‘use film as a tool to support wellbeing by triggering memories and reminiscence.’ Originally Manchester and Liverpool Cares were going to run face-to-face Cinema and Memory clubs in their separate cities. As Covid-19 put an end to our face-to-face activities back in March, this created a unique opportunity. Bringing together people from the two cities would have been a costly affair in ‘normal times,’ but we realised that all we needed now was a Zoom link to get the scousers and the Mancs in the same ‘room.’ So we decided to set up a regular Cinema and Memory club in collaboration with the older and younger neighbours from Liverpool Cares.

Since then, Jacky and Lisa select clips of old film footage every week to share with our older and younger neighbours. Myself and Liverpool Cares’ Social Club’s Co-ordinator Abbie then facilitate regular social clubs where participants use the clips as starting points for discussions and story sharing. 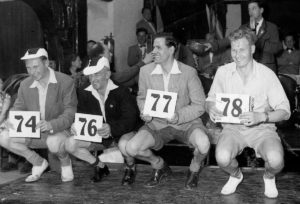 Right from our first joint social club in April, the group have found commonality and had a good laugh. A video about piers sparked a discussion about seaside holidays. The gang shared lots of brilliant memories with many remembering ‘swarms of Ladybirds’ some years at Southport, and Syvlia expressing how ‘Southport always seemed exotic compared to Liverpool.’ The group also remember hilarious times at resorts like Butlins and Pontins, with ‘knobbly knee’ competitions. Carole even reminded people about the ‘chalet patrol,’ who were essentially the resort's police and would keep everything in order (and everyone was scared of them when they were kids.) 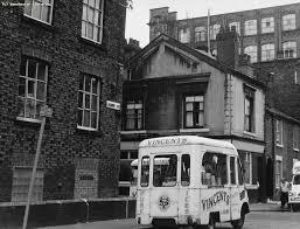 Over the months, the group have got to know each other well and found commonality in memories of Vesta chinese meals and the antics of the Stones and the Beatles, and through having singalongs to skiffle singer Lonnie Donnegan. There have also been unique stories from the rival cities. From Manchester we have heard all about the ice cream ‘turf wars’ and the joys of the formerly enormous fairground at Belle Vue. From Liverpool we have learnt of the time that Dolphins came to Wallassey Baths, and days out over the Mersey at New Brighton (Watch here.) 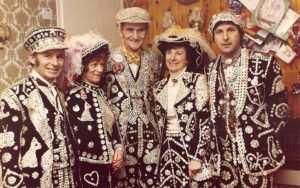 Within the group we also have neighbours from outside the north-west, and through their stories we have discovered whole new worlds. Corinne, who currently lives in Liverpool, grew up in East Ham. From her we have learnt about the Pearly Kings and Queens of East London. The ‘pearlies’ are working class cockney royalty, with a King and Queen to represent each borough of London. They are distinctive because of their suits, which are sewn with shiny mother of pearl buttons. Liz, now an adopted Mancunian, spent her first eighteen years in Glasgow. She shared her memories of the characters of the Glasgow Barras Market. The market traders would use the market as their ‘stage’ and would give a comedic spiel to everyone passing by.

The uniting of the Liverpudlians and the Mancunians has been a source of positivity over the last six months. Older neighbour Anne from Manchester said they’ve been ‘a great mixture of serious talk and laughter’ and that ‘the Liverpool lot are a nice bunch.’ Younger neighbour Eleanor expressed ‘the Manchester Cares crew… are so interesting to talk to and it’s a great reminder of how much we all have in common despite coming from different cities and being different ages.’ Liverpool based Corinne said she’s ‘had a good laugh which we all need at the moment’ and is looking forward to the time ‘we can all meet up for a good northern knees up.’ 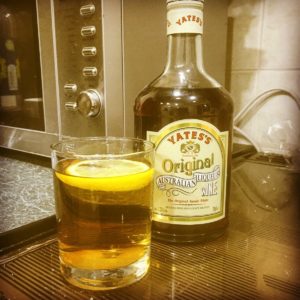 So, putting ship canals and taxes behind us, we’ve found some good common ground between Manchester and Liverpool and built lots of friendships with our neighbours. We’re looking forward to a day in the future when we can all meet up for a glass of Blob and a dance.