Diane (85) and Amy (24) met through our Love Your Neighbour programme, which introduces younger and older neighbours one-to-one for company, conversation and laughter. Over the past few months they have shared many brews while finding the best chippy tea in Manchester. 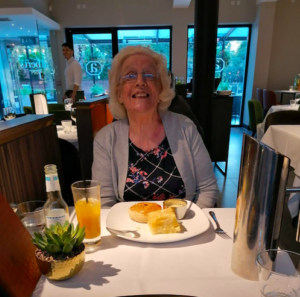 Amy: Me and Diane like to think of ourselves as fish and chips connoisseurs (and any meal). So far, we’ve sampled three of Manchester’s chippy establishments together and wanted to share our reviews with the rest of the world to ensure you are always going to the best chippy.

We went here as part of a Social Club, they do a modern take on traditional fish and chips, as well as being in a prime location for the very trendy (Blossom Street in Ancoats). Me and Diane both had a small fish and chips, alongside tartare sauce! 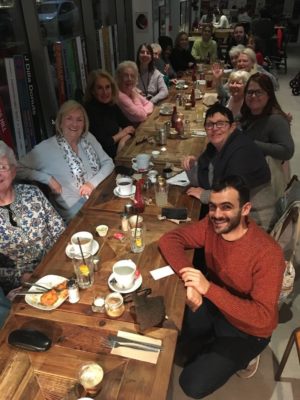 So, the lowdown, the batter was excellently crispy and the chips were perfect (no soggy spuds here!). The portion was just right and the atmosphere was amazing. Great music, great decor and great staff. We even got a chat from the owner who talked us through how HHCS started out in a van!

Amount of times I had to explain what hip-hop was to Diane: 3

Cup of tea: proper builders brew in a well-sized mug

This one is a proper traditional chippy (and came by recommendation from Diane as her and her late husband Henry were regulars!). It’s a chippy that does it all, from traditional steak pudding and two (yes two!) types of curry sauce, through to proper fry-ups.

It’s family run and is truly welcoming when you head in. Our usual is steak pudding and chips, with a side of mushy peas and gravy (or curry sauce for Diane!).

Number of trips to B&M opposite afterwards: 4

Portion control: absolutely none and we love it

The Chippy on Burton Road, Didsbury

Another one known for doing things a little differently. The first time we tried out this chippy we had steak puddings (of course). We got to try a mushy pea fritter (divine!) and we were also offered deep fried spam to try too (neither of us quite fancied this one). 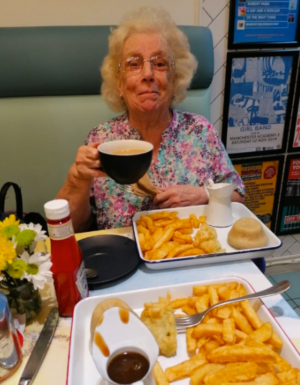 Their Christmas special involved deep fried sprouts, sure to divide a room.

Overall, we are big fans of The Chippy, although their steak puddings don’t quite top The Good Catch, their presentation in cute enamel trays, adorable gravy boats (of which Diane has ordered 4!) and they’re friendly staff who always check in with us makes it a great experience.

Next on the fish and chips hit list are; Wright’s (City Centre), Fosters (Didsbury) and making our own at home!

If you have any suggestions for Diane and Amy- get in touch. And if you've been inspired by their story and would like to get to know one of your neighbours, sign up to attend one of our inductions here – don’t be shy!